My emotional well-being and mental health are built on a structure that looks a bit like this: 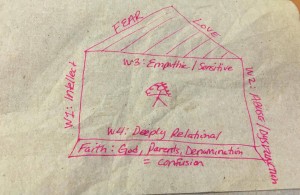 I’m discovering…with the help of an amazing therapist…that I’m likely going to have to tear this house down and rebuild a new one. I will keep some of the building blocks but I will have to trash…burn…put into the wood chipper…many of the others. I would describe it as a house made out of some fine wooden beams and marble floors, surrounded by fiberglass, asbestos, and covered in lead paint. It’s deadly…with a side of awesome.

I’m starting with the eviction of the one person who lives in this house besides me. She is an uninvited squatter. I didn’t draw her into my picture but if you squint you’ll see her…in the corner, arms crossed, sour expression, always ready to pounce. Don’t worry. She only pounces on me.

She is my inner critic. I am her prey.

To be blunt, that girl is a Bitch. She’s mean. She’s angry. She’s scared. And she’s thirsty. She does exactly two things:
(1) She never shuts up. From the moment I wake up, until the moment I go to sleep, she keeps up a running commentary on everything about me that is shit. She’s like a soundtrack of nails on a chalkboard or of someone chewing with your mouth open.

(2) She is a sneaky opportunist. She knows I’m so used to the sound of her voice that even though I internalize her thoughts, I hardly every parse out what she’s saying. So when she really wants to hurt me, she changes the sound of her voice. She takes on the voice of my mother, judgmental church voices over the years, and more recently one of the two mean girls from my last job (You know who you are and you still suck!) to get my attention. She’ll do just about anything to get my attention…mean girls always do.

But here’s the deal. Her lease is up. She’s on her way out. I’ve told her to pack and she’s doing it. Slowly. Grudgingly.

I imagine she’ll pull a George Costanza and try to leave stuff behind in my place so she has a reason to come back. I also know she’ll raise her voice, stomp her feet, and show up when she can try to convince me that she’s trying to protect me. I know her games now. Maybe not all of them. But now that I’m aware of her, I can at least start the paperwork on her 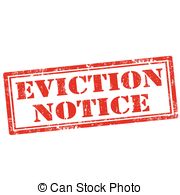