Some cities have ghosts. 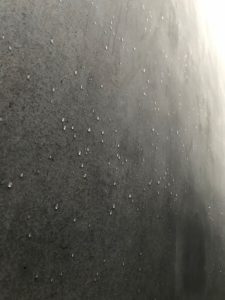 But…then…of course it does. More on that in a moment.

I have this travel habit that I always try to honor when I got to a new place. If a city has a known history of trauma, I try to visit those sites or memorials. I have a strong desire to walk among the hard parts so that I can enjoy the fruits of a cities change or growth.

So many ghosts. So many reminders. They are for us…to remind us and help us not forget. 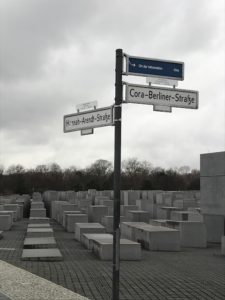 On so many corners I stopped to read signs that said something to the effect of “On this site, such and such building was constructed in 18xx. Was used to house some sort of official part of Hitler’s regime. Then was destroyed at the end of the war. And left in disrepair until the reunification of Berlin in 1990.”

Over and over this was the story of the modern-day Berlin. What that quickly creates is a tension. A dichotomy. A struggle.

Between old and new. History and progress. Pain and healing.

Then I walked into the Memorial to the Murdered Jews of Europe, and the air got heavy. Heavy like the air gets when the ghosts of a place want to be certain that they are not taken lightly or forgotten. Heavy when some beings have traveled great distances to ensure that their people, their loved ones, and their own existence is not forgotten by those who would bury their heads or try to move too quickly past history.

And as the cobbles stones raised and lowered making the path beneath my feet uneven even as the path through the memorial was perfectly straight, the ghosts walked with me. They stayed close.

When I reached my hand out to rest it on a slab of black concrete, the ghosts nodded and I felt the question of whether I understood the cold, the dark, the closed in feeling they’d had laying in their beds in camps all over this country at the will of evil men?

When I stopped and looked up, they sent sharp aches into my chest as they wondered if I felt the rain on my face and understood that my coat and gloves and hat and shoes and the money in my bag that enabled me to buy more set me so far apart from them that I should feel the pain.

And as I emerged out of the darkness and into the more populated space on the edges of the memorial…the safe places…they questioned if I was living with the joy that was mine because I’d never ever had to go through what they’d been through.

Yes, there are ghosts in several places in Berlin. Many more than I had 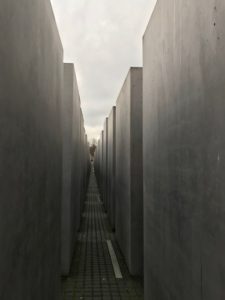 time to see I’m sure. And those ghosts are there to make the air heavy, to make my heart heavy, and to remind me to never take a minute of my fortune for granted.

Thank you Ghosts of Berlin. I heard you. I felt you. I carry a corner of your heart in a corner of mine.