Shrove Tuesday (widely known as Pancake Day) is a day in February or March, preceding Ash Wednesday(the first day of Lent), which is celebrated in many countries by consuming pancakes. Pancakes are associated with the day preceding Lent because they were a way to use up rich foods such as eggs, milk, and sugar, before the fasting season of the 40 days of Lent. The liturgical fasting emphasized eating plainer food and refraining from food that would give pleasure: in many cultures, this means no meat, dairy products, or eggs. –Wikipedia

I didn’t grow up in a home where Lent was observed. While it would have been catholic (little c) for us to do so and likely very beneficial, it was far too Catholic (big C) for the Farmers of the Churches of Christ. Let’s get real…ANYTHING that had a little stink of big C Catholicism was “far too Catholic” for us. <Insert one of my mom’s comments about the Pope here.>

Needless to say, through the years as I’ve taken up Lent as a season in the Leah Liturgical Calendar, I haven’t always gotten it right. For one thing…I often start something and then don’t give it up when we reach Resurrection Sunday. For another thing…I don’t have a good gauge regarding what I can do in any particular season of my life and so have done things like “become a vegan” and “give up coffee” (which by the way was harder than becoming a vegan). Last year it was “Read the ENTIRE Bible in 40 days.” (Let’s just say I was up late a LOT of nights over the course of that 40 day season.)

Along these lines…my spiritual walk lately would best named after the Beatles song “A Long and Winding Road” rather than Paula Abdul’s “Straight Up.” (My gift to you on the day before Lent is a Paula Abdul song in your head…no no…don’t thank me!)  But if I’ve learned anything from my Karen Armstrong theology binge it’s that compassion begins with treating myself with some…so bygones.

This year for Lent, Jesus and I are going to take a stroll through the book of Matthew together. For kicks we are bringing along my theologian boyfriend, NT Wright and hopefully a few of you will come along for the journey as well. I’d love to have you…and so would NT and Jesus. (I dream of meeting both of these guys face to face someday…just sayin’)

Oh and for the record…my gift with getting Lent wrong started early this year. Fat Tuesday is traditionally Pancake Tuesday. In years past I got up early and either made pancakes or went out for pancakes. This year however I was in a hurry and ran out of time. So this will have to suffice: 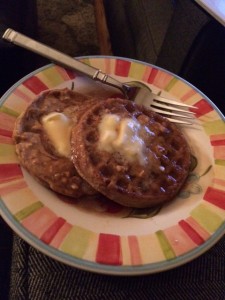 It’s okay. I think Jesus and NT would like my frozen waffles with peanut butter and the good maple syrup from Vermont. On second thought, I’m SURE they would.

See you on the journey!