What was she wearing?

This crime against the Duggar girls, the ensuing cover up, and the massive supporting of the crime by the religious right is working over the deepest, darkest parts of my soul. You know…the parts that said “What happened was your fault. He wasn’t to blame” for the first 20 or so years after the abuse. The parts of me that I fought to conquer so that I could live life to the fullest instead of being what church-folk had convinced me was “used goods.” The parts of me that did that scary nervous (I’m losing my mind) laughed when I was told that I should have spoke up sooner so HE could have gotten help and the abuse could have had less impact on HIS life. The parts of me that have recoiled in anger at the words “He says it didn’t happen. So we don’t know what to believe.”

Why was she hanging out in that place?

The Duggar Sisters. The other family “friend” that Josh Duggar violated. The women that Bill Cosby used his power to assault. The DOZENS of girls, including the 13 year old who’s mouth he pissed into, that R. Kelly deemed worthy of his horrific attention. The little sister that Lena Dunham assaulted and then made light of with pride in her book. The children that director Roman Polanski raped, who deal with their pain while the man manages to avoid extradition to the US in countries that will protect him.

And not just these…ALL the victims.

The young boys and young girls who are fodder for those in power positions. Hunted by perpetrators. Groomed to be taken advantage of because of their lack of experience, ability to be made fearful, and ultimately their ability to be victimized based on size, weakness, lack of supervision, etc. The ones who live in houses, apartments, and condos all over. The regular kids being harmed by “regular people.”

Maybe if she didn’t hang out with such bad people…

And while I’m disgusted by this behavior in any form, my stomach churns and wants to empty it’s content when such victimization is at best pushed to the side, and at worst blamed on the victims in the name of God, the Bible, and Religion.

(See below–This is said to be from the Bill Gothard Advanced Training Institute homeschool curriculum used by the Duggars. And even if it isn’t what they used…it’s existence is enough for what I’m about to say.) 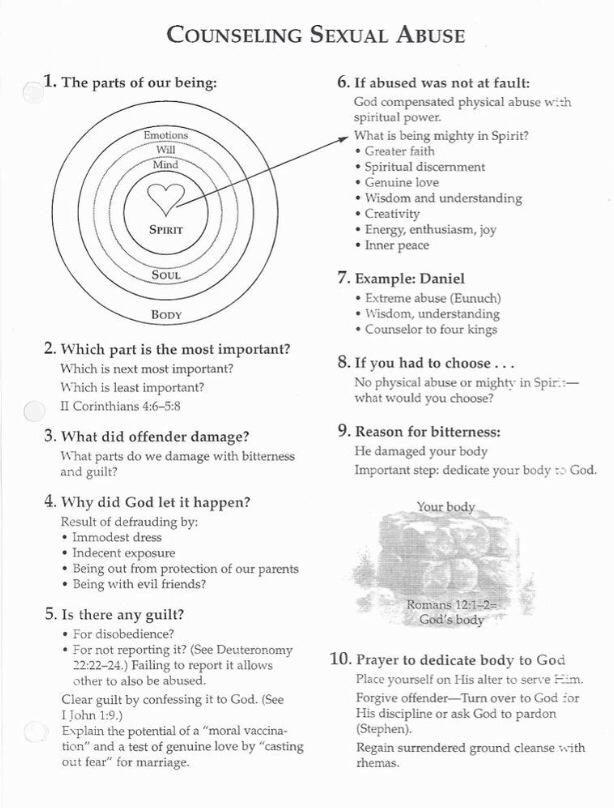 Let’s get this straight…God does not condone abuse against God’s So-Loved.

Put down your “sacred texts” and your “books of interpretation” and shut the hell up for a minute. Whoever you are calling God…that is NOT the God of love, grace, mercy, peace, and hope. So stop peddling your agenda, your politics, your abuse apologetics.

It is not okay to just keep this stuff “in house” and not deal with law enforcement and real counseling. It is not okay to treat this as a “family problem” within the church. It is not okay to use the faith of a child against them to convince them that something was their fault, that God gave them this trial to grow them, or to get them to dedicate themselves to God.

That is a crime on top of a crime.

On my most generous days when I give a shit about them, this way of dealing with abuse doesn’t do the perpetrator any favors either. They are not given any “help” and can get away with saying the right thing to the right folks (generally older christian men) about how sorry they are. It’s a cop out.

Oh and did I mention that it’s a crime?

If she knew her place, these things might not have happened to her.

So you’ll have to forgive me (or don’t…I don’t really care) if today my mind is on the victims instead of on the disgusting older brother, the powerful comedian, the perverted R&B singer, the comedienne, the wealthy director, the grandpa, the aunt, the cousin, the teacher, the priest, the babysitter, etc.

Well, if it’s true then she should work on forgiving him.

Today my mind is with the bruised of body, soul, and mind. Today my heart is with the scary nights and the endured days that follow this sort of violence against young personhood. Today my spirit cries out to the Universe…to the Holy Spirit…to the guardians of this earthly realm…begging for justice, protection, and healing for ALL the victims.

My soul is with your souls today girls and boys of the world…young and old…healed and unhealed…still being abused and out of the situation…called liars and believed. You are warriors. You are courageous. Your soul is your own and no one can take it from you. You are not damaged goods…you are wounded and in need of healing. You are the ultimate survivor.

And when the time is right and the help shows up…FIGHT. Fight for your own sanity, the gift of peace, and your right to joy.

Fight because you are So-Loved!