A friend of mine asked me a question today about feminism and the impact of a certain very famous book on “the cause”. This question got me thinking…

When I was a vegan*, I still ate honey and wore leather that I bought secondhand. This was not vegan enough for many of my vegan friends who had made a religion of their veganism and felt that there was a specific doctrine that must be followed to be in the saving animals business. It was too vegan for my vegan-ish/vegetarian friends who felt that I was being too strict with my choices and most certainly couldn’t have quality evenings out or other items if I limited myself so greatly.

As a Christian, I have walked all sorts of places on the tightrope of this faith. At this very moment there are some who believe I am not strict enough in my interpretation of the Bible and its inerrancy, as well as my strong feelings regarding freedom, gender equality in the expression of all gifts, and the inclusion of all people no matter who they love and what they call family. On the other hand, despite my feelings to the contrary, for some in my community claiming Christianity is still too limiting and has the potential to turn off those of other faiths.

As a woman, I have been the sexiest creature a man has ever laid eyes on because of my looks, intellect, and wit. These men believe I define womanhood as much as, if not more, than any other woman out there. And yet another might look disdainfully at my weight, my mouthiness, my confidence, my independence, my ability to speak my mind or say “no” without hesitation and say that I’m not feminine enough for them to give me their affection or attention.

As a feminist, and I am a feminist, I am in agreement with some of what Sheryl Sandberg and the Lean-In crowd says. I want women to feel able and confident in taking a seat at the table. I want there to be more women in high tech roles…especially at companies like Amazon where over 50% of the customers are WOMEN while less than 10% (that’s a guess) of the builders are women. I want the words used to describe me by my peers and my boss to be about my performance rather than my personality, and I want them to be the same words that men are judged by. I believe that in faith communities women should use their gifts as much as men and that patriarchy should have a bullet put into its head straight away. I want women to not be terrified of slavery, sexual assault, and any other circumstance put upon them by virtue of having a vagina. And I want women to love their bodies, take pleasure in their sexuality, be in charge of their reproductive decisions, and not be in captivity to the image the media portrays of women (not Kim K, not Gisselle, and not Beyonce). I don’t like the pornography industry and can’t wrap my head around legalizing prostitution. I love men dearly and I love being a woman and I want more than anything to be a wonderful HUMAN. This perspective is not feminist enough for some of my friends on the left and far far too feminist for many of my evangelical friends on the right.

I could be a person who reads too much…or too little.
Is too liberal or too conservative.
Too generous or not generous enough.

The truth is…all of the words we label ourselves with run a spectrum. And wherever we fall on that spectrum, there will be someone else further up or down the line who is willing to tell us we are on the wrong spot. We are a people that are quick to share our opinions, judge others, and leap to conclusions about right and wrong. We want things black and white and we want to know and to make sure others know that we are doing things the best and most correct way.

But maybe…just maybe…Emerson was right and we should make room, breathing space, and open ourselves up to possibility. 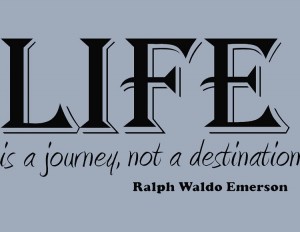 *Note: I am no longer a vegan but consider myself a pescatarian