My favorite acupuncturist, told me that we store old energy in our bodies and that acupuncture can sometimes touch it, move it around, or bring it to the surface. She described it as a feeling with no storyline…because we don’t know why it is happening. She warned me that it is almost the exact opposite of the healing naps acupuncture has come to be for me.

My least favorite acupuncturist (at least today), hit one of those feelings without a storyline this morning before the sun had even risen. And I swear to the heavens it almost took my legs out from under me the rest of the day. 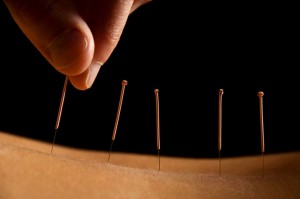 Picture it…I’m laying on the table with about 20 needles in me already. He says “I think I’d like to place one or two more needles than last time.” The man sticks a needle in the space between my left thumb and forefinger, and I instantly feel a swell of sheer panic rise in my throat and gasp. He asks if the needle hurts and I mumble a garbled “no”. He then places one in the outer edge of the palm of my right hand, and I instantly start fighting off sobs. As I lay there, feeling like I might scream “GET THIS SHIT OUT OF ME”, he ponders over a few more placements.

I am laying on the table SCREAMING in my head. Screaming at him. Screaming for him. Screaming in terror because of the panic that I can feel coursing through me in a way that I don’t know that I’ve ever felt before…

He left the room to allow me to “rest.” What usually follows is the nap of all naps. What followed today was staring at the backs of my eyes lids and saying to myself “You are an adult. Keep your shit together.”

Tears flowed down the sides of my face and pooled in my ears and ran down my neck. I got a case of the shakes, though the room was probably 72 degrees. I had to will myself not to get up and start pulling needles out.

Panic is not a feeling I let rise in me often…maybe never? But today it was an almost constant throbbing undercurrent for roughly 10 hours. While I was working, if I took even a moment to tune into my thoughts, what I wanted more than anything was to hide. To go home, lock the doors and fucking hide. Instead I worked. My heart raced. I felt sick. I felt hot. I felt cold. I felt weak. I felt like puking. I felt like I had felt after each time I’d been molested and fell into a shame storm of fear, panic, dread, and secrets…things no small child knows how to deal with. And sure as hell no small child who also has God issues.

Ah yes…I know this feeling. Panic is an old familiar foe…but I’ve been keeping him at bay…by making sure he never surfaces.

Here’s what I learned from one of the hardest emotional days of my life: I won’t die from the feeling of panic. I also don’t have to eat or drink or shop or talk obsessively just because I feel panic. I can sit with it. I can pray. I can close my eyes and remind myself that I’m not a little girl who is at the mercy of an abuser. I can also just wait…it can’t hang around forever. Eventually it too must go because everything changes.

(PS–Healing is hard. It fucking hurts. But it is necessary to heal…or else all you are living with is scabs. And I’m sick to death of scabs!)