Book
The Autobiography of Malcolm X

This religion taught the ‘Negro’ that black was a curse. It taught him to hate everything black, including himself. It taught him that everything white was good, to be admired, respected, and loved. It brainwashed this ‘Negro’ to think he was superior if his completion show more of the white pollution of the slavemaster. This white man’s Christian religion further deceived and brainwashed this “Negro” to always turn the other cheek, and grin, and scrape, and bow, and be humble, and to sing, and to pray, and to take whatever was dished out by the devilish white man; and to look for his pie in the sky, and for his heaven in the hear after, while right here on earth the slavemaster whiteman enjoyed his heaven.

Many a time, I have looked back, trying to assess, just for myself, my first reactions to all this. Every instinct in the ghetto jungle streets, every hustling fox and criminal wolf instinct in me, which would have scoffed at and rejected anything else, was struck numb. It was as though all of that life merely was back there, without any remaining effect, or influence. I remember how, some time later, reading the Bible in the Norfolk Prison Colony library, I came upon, then read, over and over, how Paul on the road to Damascus, upon hearing the voice of Christ, was so smitten that he was knocked off his horse, in a daze. I do not now, and I did not then, liken myself to Paul. But I do understand his experience.

At 15 I saw a copy of this book on my best friend Brooke’s bookshelf. I was curious. But I didn’t ask.

At 17 I bought a copy of this book at a library book sale in my home town. But I didn’t read it.

Then as an 18 year old first semester sophomore, I decided it was high time. As hard as finding time to read could be in college, I carried this book with me everywhere…stealing moments here and there to read it…getting to class a few minutes early just to grab 4 or 5 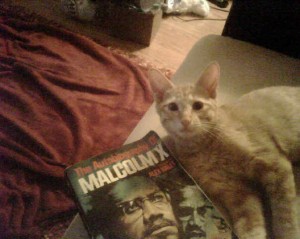 minutes to disappear into Malcolm’s story and his world for a brief second. (My accounting cohort at a very southern, VERY conservative Christian University began to call me LeahX during this time…and it has stuck as a nickname with that crew through the years.)

Like many political, religious and famous figures of previous decades, I came to this book with preconceived ideas because I had parents who were not afraid to state their opinion as fact. As I dove into this story, I realized this was a man I hadn’t known. A story with more nuance and complexity than I’d ever imagined. It was one of my first forays into humanity, reality, and the richness of life and journey.

I’m so grateful for this story. This book. The comfortable voice in which it is written. And it’s ability to crack open my narrow mind.

More Myself: A Journey
Alicia Keys