Book
The Lion, the Witch, & the Wardrobe

Aslan is a lion- the Lion, the great Lion.” “Ooh” said Susan. “I’d thought he was a man. Is he-quite safe? I shall feel rather nervous about meeting a lion”…”Safe?” said Mr Beaver …”Who said anything about safe? ‘Course he isn’t safe. But he’s good. He’s the King, I tell you.

He’ll be coming and going” he had said. “One day you’ll see him and another you won’t. He doesn’t like being tied down–and of course he has other countries to attend to. It’s quite all right. He’ll often drop in. Only you mustn’t press him. He’s wild, you know. Not like a tame lion.

Wrong will be right, when Aslan comes in sight,
At the sound of his roar, sorrows will be no more,
When he bares his teeth, winter meets its death,
And when he shakes his mane, we shall have spring again.

Quotes quotes and quotes. I could go on for days about this book and the rest of this series. Really it’s the whole series that I love and 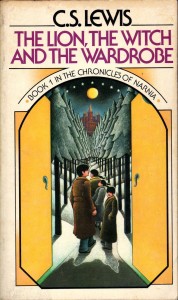 adore. I’ve read them over and over through the years. I’ve watched the movies. Hell…I’ve even listened to the books on audio. I love this story and one day I’m going to hug CS Lewis for the years of joy they’ve given me. And by hug him…I mean…him or some light that is him or whatever spiritual form he takes on in the next place.

Memory 1– I HATED summer church camp. Hated it. I was a chubby kid. I was awkwardly shy. I was jealous of all the kids that loved my grown up sister as their teacher while she was MY sister. I hated summer camp. But the year that the camp director read The Lion, the Witch, and the Wardrobe to us meant that each day for that week I had a period of time that I was in heaven. Book geek heaven. It was the first time …but not the last…that I wept at Aslan’s death and wept again that he wasn’t dead after all!

Memory 2– I spent a summer with my sister and spent all my time with Zachary and Jacob. They were probably 7 and 9 and I adored them and I’m pretty sure the feeling was mutual. Each night we read from this book. And they were enthralled. The fact that they remember it all these years later and associate ME with that book, makes me happy. Someday I believe they will read it to their kids and that will make me happy!

Memory 3– I was struggling through therapy dealing with my demons when I decided to take a road trip from Albuquerque to Denver. I listened to one of the books in this series on my way up and back. I distinctly remember having to pull over to the side of the road somewhere in the middle on my way home to sit and weep. Weep over how wonderful the love was/is between Lucy and Aslan. How tender a lion he is…though he be fierce. And how much she trusted, loved, and had a great expectation of being with him. It stung a deep spot in me that needed that sort of unconditional protection and relationship freedom. It was a good healing cry.