nihilism (noun) The rejection of all religious and moral principles, often in the belief that life is meaningless. Synonyms: Skepticism, negativity, cynicism, pessimism

Last night as Dr. Cornell West shared the story of Rabbi Abraham Joshua Heschel and why his life is relevant to us today he said “Heschel believe that the major ecumenical movement of the 20th century is nihilism. He believed this epidemic of hope and disinterest in justice caused a callousness of heart and a lack of courage among people of all faith traditions.”
It seems so counterintuitive that religions…which espouse the concepts of honesty, faith, grace, mercy, and hope…should be so caught up in nihilistic tendencies and behaviors. But if we really think about it is so very true…particularly in Western society.
Nihilism is what makes it possible for us to build multimillion dollar complexes but not feed the poor.
It’s what makes us more interested in the right to our guns than in the right to mental health care.
It’s what makes us angry at any attempt by “the other” to have what we have and feel it is deserved.
Nihilism says “I’ll be as nice as I have to be while I’m here because I’m waiting for Jesus to come rescue me from here (earth) and take me to there (heaven).”  (PS–That’s not even exactly Biblical…sorry to disappoint)
It’s the reason humans are so blasé about taking care of the planet.
“It’s all meaningless and it’s going to end and the best I can do is hope for something in the afterlife that makes up for it.”
To that I say…what a load of crap!
It’s cowardice to just throw in the towel, scrape for what is YOURS, and then ignore everything else and hope no one tries to ask you for anything. It’s cowardice to be filled with hate, promote propaganda, be unwilling to discuss the difficult things, close your doors and insulate yourself, your children, and your entire life from what is “out there.”
I know because I’ve done it. I’ve lowered my eyes rather than look people in the face and have to deal with their humanity. I’ve viewed people as the enemy when really they just had a different opinion. I’ve chosen the silence of a standoff over the confrontation that could lead to peace.
#ENOUGH.
I don’t believe it’s all meaningless.
Is it all sunshine and roses…uh..NO. (Monday mornings are a sure sign that life isn’t only gumdrops and ice cream cones.)
Dr West said “Heschel was anything but an optimist. He was far from it. Instead he was a prisoner of hope. Held captive by the notion that there is more to all of this. Captive by the song, the poem, the art, the laugh, the dance, the vision. A prisoner of the hope that there is MORE.”
Please let me have enough courage that if I’m going to relinquish my freedom that it will be only so that I am a prisoner of hope. 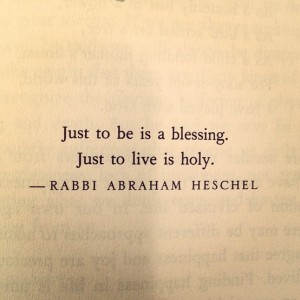 More Myself: A Journey
Alicia Keys