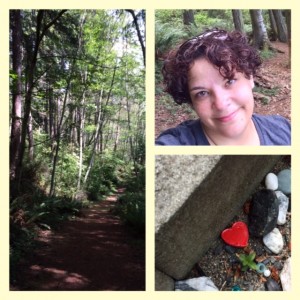 I’m not a risk taker.

I am instead a planner. I like order. Structure. I am not a big fan of ambiguity or uncertainty.

I won’t blame everything on my childhood but let’s face it…kids who grow up in chaos tend to either gravitate to crazy amounts of chaos or rigid structure. And I have done the latter a lot in my life.

But every now and then I take a risk. I do something I wouldn’t normally do. I step into space that I have not previously held.

I recommend it. It teaches you something about yourself. It reminds you of your humanity and the humanity of others. It give you an often missed glimpse into your bravery and courage…which if you are like me you KNOW you have in spades but don’t need very often as a full-fledged grown up.

So this week I took some risks…

Strength
Joy
Smiles
Laughter
Blessing
And recollection….I now recall again who I am. I am brave. I am fun. I am strong. I am peaceful at the core of my being because I know how to be quiet in quiet times and to speak when I must. And I remember that I am both brave and afraid in equal measure of some things…and I am unwilling to live captive to fear instead of living bravely.
I AM FREE…to take an effing risk! 😉