Grief is an odd thing in that it just shows up, and before you realize it, you’re underneath it. –Monique Ruffin

Yesterday I sat on the beach in Costa de Caparica and watched the sunset. With my toes buried in the cool winter sand and 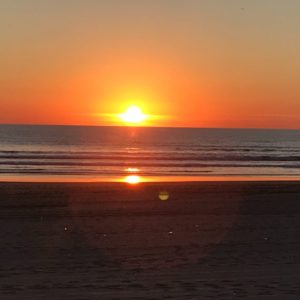 my hands in prana mudra, I began to sing. Yesterday grief looked like singing a song from my childhood as Portuguese surfers walked by in wonder. My neurons firing memories from a childhood spent in church next to the man who sang bass that would reverb against my ear laid to his chest. “It is well with my soul”.

Friday I was in a meeting and someone said something about how hard a week they’d had. I said “My dad died this week. I win.” Friday my grief looked like an angry child who wanted to stomp her foot and cross her arms over her chest at the idea that anyone else would think their week was hard. Had they lost their hero? Did the person they most wanted to make proud leave earth? Friday grief was bitter.

Thursday night I went to dinner with a friend from work and met his beautiful wife and precious baby. We talked about life, drank wine, and laughed.  The laughter was the kind where you cannot catch your breath. The kind of laughter that gets slightly higher pitched as you begin to play one off the other. These friends knew about my dad and they let me have a night off. They let me do one of his favorite things…laugh. If I could paint the moment, grief would be hazy and yellow like the best candlelight.

Wednesday I woke up and felt the weight of going into my first day on earth without my dad. It felt like too much. It felt like not enough. Many people expected that I would stay home and cry the day away. I wanted…needed…to work. I needed to feel useful, alive, helpful, and seen. I needed to sit with my friends and say very little. I needed hugs from my Daniels and the watchful eyes of my boss and the gentle nudges from Melanie. I needed my people…and in Sweden my people are in the office. Wednesday grief looked like me getting room to feel and not feel at my own pace.

Tuesday night in Stockholm my dad died. I found out in the late evening after taking my team to dinner. I talked to my sister and we cried and laughed. I said “I’ve wondered for so long how I would feel in this moment and now…here it is.” Tuesday my grief looked like despair at never hearing his voice again or seeing his big bulky hands or even that look in his eyes as he tilted his head towards me in warning. Tuesday my grief looked like wanting another chance to piss him off, make him laugh, or have him tell me a story I already knew the ending to.

Tuesday morning, he was still alive and I was still heartbroken at what was coming. Even as I prayed for its hastening to relieve him from his pain and unconsciousness, the pain was real. Tuesday my grief looked like ugly crying on the shoulder of one of the kindest men I know and getting snot and tears on his nice sweater. Tuesday I accepted the hug. I allowed myself to be comforted. I gave myself room to despair at the loss that would come. I didn’t even know how soon.

I’ve sat with my grief over these past few weeks. Not just the grief of death but also the grief of dying. I’ve let the tears come. I’ve built the wall around the tears when I couldn’t let them flow for fear of overwhelm. I’ve been angry and said “My family is complicated” when I felt judged for my choices to not go to the US, to go on holiday, to do <insert thing that brings judgement here>. I’ve felt buffeted by friends near and far. I’ve felt alone in the moments when what I wanted was to lay my head in my sister’s lap and sob.

My grief has been alive. It moves and breathes and has texture. It is the texture of the hugs I’ve received, the cups of coffee handed to me, the phone calls. Grief pulses with the warmth in the words “Do you want me to come over?” and “What can I do?” And grief pales in the meaningful and trite words of condolence that must be said and still feel too small for the size of the man and his life.

This won’t be the last I write about grief…but it is my first shot at telling this part of my story. If for no other reason than on Monday my grief looks like writing these words down so that they become part of the record of my life and the story of his homegoing.

I love you Dad.
LeLiLu